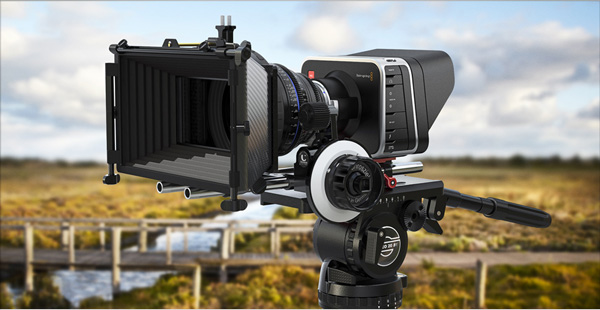 Blackmagic Cinema Camera will be demonstrated on the Blackmagic Design NAB 2012 booth at #SL220.

Many current generation video cameras suffer from a “video look” due to a limited contrast range, a maximum HD resolution sensor, poor quality optics and lenses, the use of heavy video compression for file recording and poor integration with NLE software metadata management. With these limitations, they cannot be used for high end work or feature films.

Blackmagic Cinema Camera has been designed to eliminate these problems so customers get a true feature film look, and at an affordable cost can shoot high end television commercials, episodic television programming and feature films.

Blackmagic Cinema Camera also includes a full copy of DaVinci Resolve for color correction and Blackmagic UltraScope software for waveform monitoring. UltraScope can be run on a laptop connected to the camera via a Thunderbolt connection.

One of the most important features of the camera is its super wide dynamic range of 13 stops, allowing feature film quality images. Commonly people focus on more pixels, however often this just creates a higher resolution, but still “video” looking images that suffer from highlight and black clipping that limits details. Blackmagic Cinema Camera’s wide dynamic range eliminates this problem and provides film quality with dramatically more detail retained in black and whites in the image. Once the shoot is complete, the included DaVinci Resolve color correction software can be used to adjust images and take advantage of this extra range in the images. The high quality EF and ZF lens compatibility also helps create sharp and cinematic images that look incredible.

To eliminate the damage that low bit depth and high compression video storage creates, Blackmagic Cinema Camera includes a fast SSD recorder. The built in SSD recorder can record on fast solid state disks the full sensor detail in 12 bit Log RAW files in the open standard CinemaDNG format. These files can be read by all high end video software. The full 2.5K sensor data is stored in the files completely uncompressed because the SSD has the speed to store video data at the required rate. Then this high quality file can be color corrected on DaVinci Resolve for the same high quality result currently only possible on cameras costing tens of thousands of dollars.

Blackmagic Cinema Camera has been designed as the perfect companion to Final Cut Pro X and Avid Media Composer NLE software. Unlike other cameras, which require the use of custom video file formats that are not compatible with popular NLE software, often making the post production process a nightmare, the Blackmagic Cinema Camera includes absolutely no custom video file formats, and every file type included is open standard. It records into CinemaDNG format for RAW files, ProRes and DNxHD for HD resolution files compatible with Final Cut Pro X and Avid Media Composer.

The built in large LCD display makes focus easy, and allows playback of captured files. Blackmagic Cinema Camera includes a built in microphone, as well as external jack based mic/line level balanced audio connections. When playing back recorded clips, a speaker is built in, and there is an included headphone socket, as well as embedded audio on the SDI output and Thunderbolt connection. The SDI output includes all camera data such as timecode, transport control, shutter angle, color temperature setting and ASA information overlaid in attractive anti aliased fonts.

For easy metadata entry, the built in LCD features fast and responsive capacitive touch screen technology. When the user taps the display with a finger, a data entry window called the “slate” appears. This lets the user enter shot information just like typing on a smart phone. This data is then stored in the files so can be accessed by NLE software when editing content later. Metadata is compatible with popular software such as Final Cut Pro X and DaVinci Resolve. All camera settings can be changed on this touch LCD, such as frame rate, shutter angle, color temperature, dynamic range, focus assist settings and more.

Blackmagic Cinema Camera includes an innovative industrial design built from solid machined aluminum metal which results in an attractive but rugged design. All of the camera, recorder and display have been shrunk down into a lightweight design thats very portable.

“This is one of the most exciting products we have ever created and its been a work in progress for a very long time,” said Grant Petty, CEO, Blackmagic Design. “Ever since I was a telecine engineer back in the 1990’s I have wished that video cameras would include features that allowed them to perform creatively similar to film. However current digital cameras are too heavy, way too expensive and need costly accessories to work. We felt there was a need for a camera that delivered these features in a design that’s optimized for professional video shoots, as well as being a compact, elegant design that’s easily affordable. We think we have achieved that!”

Blackmagic Cinema Camera will be available July 2012 for US$2,995 from Blackmagic Design resellers worldwide.

Product photos of the Blackmagic Cinema Camera, and all other Blackmagic Design products, are available at www.blackmagic-design.com/press/images.